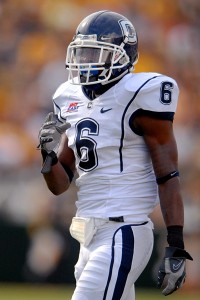 I hate the idea of this becoming tradition; Sitting down to pen my thoughts on the current state of affairs regarding the murder of my teammate, Jazz.  But somehow that’s what it is, every October I now count the days until that day.  When life and all it’s trappings came screaming into focus.  Maybe, on some level, it’s a blessing that we all are forced to sit down, shed a few tears, and take stock.

Of course things have changed since 2009; Jasper’s daughter is another year into her life not knowing her Dad, the guilty  have now been prosecuted and sentenced, and those of us that had the distinct privilege to call him family continue with live our lives with a personal knowledge of just how fragile all this is. The UConn program marches on; The season in full swing.  I know the vantage this day offers does not diminish, at least not for me.  The petty squabbles, bad days, or “problems” we face are not nearly as bad as we might think.  I know Jazz wouldn’t want us to live our lives sad or in mourning, and so I fight back tears for a man taken far too soon.

Perhaps this was his last gift to us, one from a man of incredible character, work ethic, and devotion: Play every play like its the last play you’ll ever play.  Even on your worst day, you’re lucky to be here.— Live 365.

[Originally Posted  October 19th, 2009]
A few weeks ago, I had the privilege of going to a Monday night football game. In the stands, I sat with my former teammates, joking and laughing.
UConn’s star cornerback, Jasper “Jazz” Howard, sat next to me.

While Jazz and I were hardly best friends, we were teammates, on the same defensive unit, who shared many laughs and, of course, trying moments together.

“How are the guys doing?” I asked Jazz that night.

“Young, man,” he replied in a throaty, soft-spoken voice, which sounded strained but was always at ease. “Real young. But, you know, we still gonna bang.” (A smile crept across his face as he said this.)

Fast-forward to a homecoming game this past weekend, where I selfishly explored my own emotions on being at a place where, for five years, I was very much on the inside, metaphorically and physically. Inside the locker room, inside the huddles, inside the football mentality.

On Saturday, I returned to my home stadium, for the first time, and was very much on the outside. Outside the lines, outside the players’ box, outside the locker room.

After the game, I got to join my teammates, my brothers, in the fight song. I made my rounds, slapping hands, hugging and smiling, exchanging the typical locker-room jabs. I went over to Jazz, congratulated him on his excellent game (an interception, forced fumble and about 13 tackles). Laughing, he told me I was almost as skinny as he was, and I reminded him that he was still about 1000 times the athlete I’d ever be.

The entire time I was there, I was thinking, “Man, this is awful.” I am not yet at a place where I can enjoy watching the game from which I am less than a year removed. I was emotional about the smells, and on my long drive home, I had a lot of time to reflect on how much I missed playing, how important it was to me — things that in less than 24 hours would suddenly seem so much less significant.

I left that locker room. I came back to Boston. I went to sleep.

I woke up, and everything had changed.

The text messages said it all:

I look back at that moment, from my Monday morning perspective, and I am embarrassed. A lot changed from Saturday afternoon’s pettiness to Monday’s deeper meaning. All my complaints about being done playing football didn’t matter. My teammate and friend had lost his life, leaving behind a family, a girlfriend, a daughter on the way.

Instead of enjoying the fruits of homecoming, remembering the good days, I am trying to make sense of something that is senseless.

How does a kid who makes it out of Miami — leaving the violence of his hometown by his own reckoning — get murdered in the seemingly safe setting of Storrs, Conn.?

These are questions without answers.

The violence of the football field is the stuff we can control, and Jazz was a master. Analogies between on-field violence and the outside world are often made, without regard to actual violence. And yet, in this instance, I have realized just how petty and fake that violence is. There are rules, whistles, referees.

Early Sunday morning, there were no such systems in place. My friend and teammate died at the hands of someone who clearly placed no value on life, and certainly did not consider the consequences of his actions.

Jasper Howard was a man of incredible character and work ethic. He likely would have risen to the rank of captain in seasons to come. I have no doubt that Jazz, while undersized, would have been an NFL-caliber player. He was soft-spoken when he had to be, but was a vocal leader on the field. He pushed, provoked and brought out the best in his teammates.

I am always grateful to have been a part of UConn football, but I am — without a doubt — a better man for having shared the same field with Jazz.

I am not sure there are deeper lessons to be learned here. I don’t want to live in a world where one of my friends has to die for me or anyone else to value life. But here I am, reflecting more and more, valuing my own life and my own situation in a way I never did before Jazz passed.

I wish that society allowed us more opportunities to stop and reflect, but it doesn’t. All I can do is lead my life, with my new lease on it, the way that Jazz did — with honor, integrity and a relentless work ethic.