According to the Boston Herald, there’s gonna be a few changes around old Fenway:

Purists, beware: Thursday, the Red Sox have plans to unveil “changes to the ballclub’s logos” and “select uniforms.” Manny Delcarmen, Jim Rice, Jerry Remy and other club officials will be on hand for the announcement/unveiling.
It’s likely the team will reveal a new “alternate uniform,” to either replace or supplement the red tops the team often wears for Sunday home games.
There’s no word yet on what the new logo will look like, or whether it will replace the existing one, which dates back decades.
I’m not too worried. As long as it isn’t pinstripes we should be okay. Then again, if they come out with some fashion-foward design Carl Yastrzemski will probably haunt the dreams of Theo Epstein. I’m just hoping the uniforms don’t fall anywhere in the same ball park (pun intended) as those Eagles throwbacks: 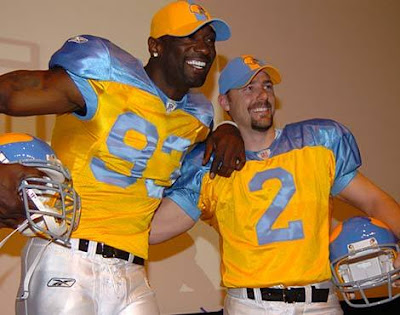