UCONN is the new “Running Back U.” There. I said it. And I’m sure every subsequent visit to Storrs (running backs coach)Terry Richardson will remind me. Terry Caulley, a great talent fo 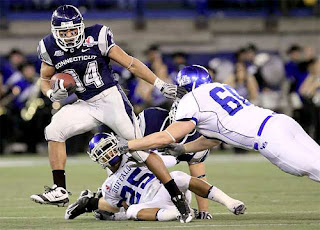 und his niche in the CFL. This year Donny Brown emerged as one of college football’s great running backs. Certainly the greatest UCONN has ever seen. With a promising NFL career ahead of him, it is hard not to love the guy. But what makes UCONN ground zero for great running backs is their depth at the position and the ability to cultivate talent.
Graduating Donny Brown leaves a gap in the offense. But freshman running back, (North Dartmouth native) Jordan Todman provided some interesting moments for UCONN ripping off yards from opposing defenses in unlikely situations. And please don’t forget Andre Dixon. An All-Big East Performer in 2007, the combination of Todman and Dixon 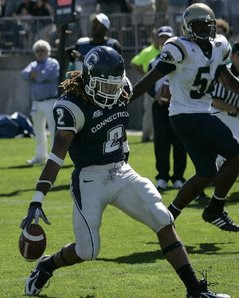 will provide the leg power to drive the spread offense under new offensive coordinator Joe Moorhead.
Brown was a highly touted but under recruited running back out of New Jersey. Andre Dixon and Jordan Todman both flew under the radar of major programs right in their own back yards (Rutgers and BC respectively). And yet they both look to provide a 1-2 punch that will likely be UCONN’S offensive threat.
What about full back Anthony Sherman? He quietly became UCONN’s most outstanding receiving threat, providing an extra dimension out of the backfield, and a consistent blocker as well as ball carrier in short-yardage situations.
With PITT losing Shady McCoy, I would say the top running back threat to be watched is a lock between WVU and UCONN. Is my opinion biased? Absolutely. After all, I am a graduate of Running Back U.

The Arizona Cardinals will be playing the Pittsburgh Steelers in Super Bowl XLIII in Tampa, Florida. In an equally intriqing match up: We see if Rogain Foam wins the battle against Dying Hair Folicles this month on Rob Lunn’s scalp.

The story line of the Super Bowl is really whether the most hated owner in the NFL, Bill Bidwill (Cardinals) can prevail over one of the most beloved men in the NFL, Steelers owner, Art Rooney. Win or lose Rooney, Bidwill, and Kurt Warner will all be catching the early bird special at Denny’s on February 2nd.

According to Rick Reilly, Larry Fitzgerald is “the anti-TO” because he doesn’t complain, or celebrate and “…dresses and speaks impeccably.” No. What makes him the anti-T.O. is that he’s the marquee receiver in the Super Bowl, not at home on his couch throwing darts at an 8×10 of Tony Romo.

Kurt Warner and Wife.
Spokespersons for the “One-size-fits-all-gender-neutral-haircut.”