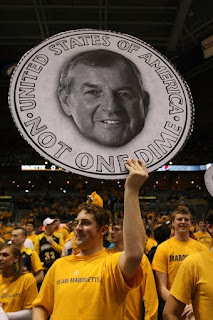 Jim Calhoun won his 800th game yesterday. Sadly, the bigger story was that the post game press conference did not hold any of the theatrics that the South Florida game did. (Not a dime. Not a dime!). There have been some developments in the days past, when Jodi Rell (Governor of Connecticut) said that if there was a “do over” Calhoun would probably choose his words better, or something to that affect. Well my advice? Jodi Rell should realize that while she is a nice lady, and looks like “everybody’s grandmother” (and has some interesting Christmas sweaters), 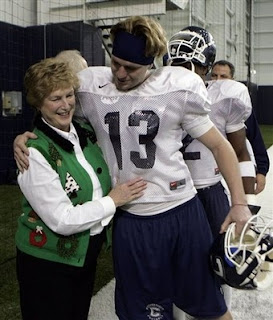 more people in CT know who Calhoun is than Jodi Rell. Secondly, Calhoun is one of only three state employees that actually pays his own salary. You know what else? Jim Calhouns initials are JC. You know who else he shares those with? Well after 800 wins he is the Jesus Christ of Storrs, CT. (…cause you know, who’s footsteps better to follow in than JC’s?)
The good news, is I did score an exclusive interview with another famous UConn coach , in one sit down. So here you have it,

FWG: Its so incredible to have you guys here right now. I can’t believe we could get the logistics worked out. Although I did have to pay a small fee. Jim, have you received my check?
JC: Not a dime.
RE: Not a dime!
FWG: hmmm thats weird. But not unusual for me. Moving on, this next question is for Coach Edsall. You utilized Reggie Mclain this year on “Nickle Package” defenses. Some experts suggest moving another safety in the mix, called the “Dime package.” Will you run that this coming season?
RE: Not a dime!
FWG: Well that solves that. Coach Calhoun, I have some change in my pocket, its not a nickle, its…
JC: …not a dime!
FWG: Thats right, its a quarter. Randy, how much do you make a year?
RE: Not a dime!
FWG: Incorrect, you make over a million a year also. Don’t lie to the media, Randy. Or we’ll get Jeff Jacobs on you again. By the way, how much do you think Jeff Jacobs is worth?
RE: Not a dime.
FWG: Agreed.
JC: Not a dime!
FWG: Its not your turn yet. I want to thank you both for your time, granting me this exclusive. Anything you want to tell our readers before we go?
JC/RE: Not a dime!
FWG: That doesn’t really fit there, it’s almost as if this interview was totally made up..

Final Thoughts:
It is 9:20am, I leave for New York today (then its off to Europe). There is a plumber in my basement. The most awful noises are now coming out of there. I can only imagine that it looks like a scene from “Saw” right now.