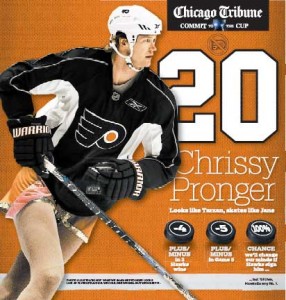 Philly Flyers’ Chris Pronger –  Chicago Tribune‘s hating turned into a self-fulfilling prophecy when the Blackhawks notched the Stanley Cup.  The princess in his tutu skirt totally punked out and has been bitching like a total…bitch.  Chrissy, next time shut ’em down to shut ’em up. 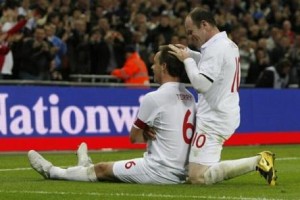 That World Cup thing –  FYI: I hate soccer and all its really girly dudes that prance around with faux-hawks.  So this photo of  John Terry/Wayne Rooney [England] buttering each other’s crumpets just seems to fit the bill.

We’ve been moved into our new apartment for a week.  Still don’t have cable or internet.  Might as well be blasting smoke signals instead of emails. Absolute withdrawal.   So Saturday night, we had a few rounds of Pictionary by candle light just like a couple of well-behaved single ladies should.  And then played some hands of poker.  With the guys.

But back in the office and hooked up online with reality today, after furiously Googling Jersey Shore updates and sports pics, I gots big plans for Pictionary Wall of Shame this weekend.