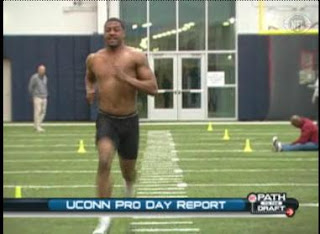 The 2009 UConn Pro day was held yesterday at “The Shenk” training facility. Workouts were, in a word: OUTSTANDING.
Darius Butler again proved that he can move his hips, and has the kind of speed that can kill.
Will Beatty, performing well in the bench, makes him a discussion topic, as he might be one of the top 5 offensive linemen in this years draft. However there are three stories I want to touch on, after speaking with Cody Brown (DE/OLB), and his pro-day work out.
Cody drastically improved on his 40 time from the combine, running in the 4.5-4.6 ranger, compared to his 4.82 performance at the NFL Combine.
Julius Williams (another one of my brothers on the D-Line) comes out of no where, with a verticle jump over 41inches, and benching 225lbs 36 times. That is simply outstanding. For those of you who dont know, Julius Williams has a back that could block out the sun, a true physical specimen, with an outstanding work ethic.
And then there is Dahna Deleston. What can I say about Dahna. How about “quiet storm?” in 5 years playing with the guy I probably heard him say about 10 words—total.
He weighed in at pro day at 217lbs, ran a sub 4.5 40, and absolutely blew scouts away.
It really is a testament to work ethic, and to the character of these young men, all of which flew under the radar of major college recruiting.