Meet “Walkon-Boy“–his name is Patrick, he was a walk on at Minnesota, and much like me hasn’t given up the dream of playing football. While I toil in Austria, Pat is in Sweden–doing whatever it is Swedes do best (which by my account is Dip SNUZ and play hockey). Anyway–since The Formerly Fat White Guy Project is OFFICIALLY UNDERWAY, Pat wrote something for all the nay-sayers out there, who want me to to stay fat. I’d also suggest, checking out his blog, it’s hilarious. Anway, Enjoy:

There was a bit of backlash when FWG mentioned chronicling his weight loss efforts. Some people were disheartened that the self-appointed Fat White Guy would be dropping the fat from his body. Rob asked me to write a piece explaining the ‘lifetime membership’ concept of the Fat club {if he goes reverse Michael Jackson and has a sex change operation – then we may have some problems.} 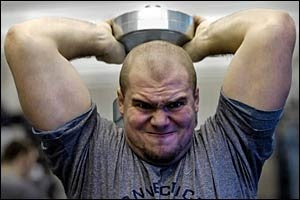 As a former fat white guy, and current chubby white guy, I am here to say that once you have learned the true ways of fatness there is no way to unlearn them. Essentially, you have a lifetime membership in the corpulent fraternity for which there can be no double secret probation {And your parents don’t even need to be rich to buy your friends!}.

– I entered college at 217 lbs and left in the 280-ish category. This was achieved by cramming 4-5 meals in my mouth every day. It sounds fun, and it is for about two weeks. After that, the constant attention is almost as draining as {what I imagine} trying to lose weight is. Also, living with four offensive lineman helped the cause, there was always food in the house. Or someone making a food run.

– My nickname was ‘Fatty Paddy’ the second half of my college career.

– And to prove that fatness is a lifetime trait that you can’t unlearn, I put down a triple burger with over a pound of meat on it last weekend without too much of a hassle. The next day the burger brought a bit of discomfort, but so it goes.

Being a fat guy is a bit like learning martial arts, training and mental toughness allow one to progress up something like the belt system. {I am not aware of one, but that may be the next quest – to codify a ranking system of fat proficiency.} And even though you may stop training in El Gordo Dojo, you will always have the lessons learned to help you along the way.

Here are some of the lessons learned {Most of it can be summed up in the eloquent Bar Darwinism post}:

– Being interesting: Skill or glamour postion players in life feel like people will automatically defer to them, and most of the time that is the case. However, fatties need to be either entertaining or intelligent to garner attention. Hell, some of the time just by being fat is interesting enough.

– Humor: Fat people are funny. It’s science. Part of it may be by beating people to the punch making fun of oneself then people allow more leeway when fat people poke fun at others. Self-deprecation as a means of protection. Offensive lineman are typically the funniest guys on a football team. At Minnesota, before games they had joke time in the locker room before they went out to warm up.

– Thick Skin: The world is a cruel and unfair place. Fat guys realize that a lot sooner than most, and therefore are usually much better at dealing with it, being persistent and turning negatives into positives.

The positives of fatness are many, but people you love want you to stick around for a while, and if losing weight helps you do that, it’s something that can’t be all that bad. FWG, and anyone else who wants to lose weight will always be fat at heart and they’ll carry their fat skills for the rest of their life. When I dropped about twenty pounds basically by not working out as hard and eating a more realistic amount of food, my joints felt better, I had more energy – and my grandma {Who is the sweetest lady in the world and who’s most vicious taunt in card games is : ‘That’s niiiice.’} even added some lard-ass levity by saying, “But Patrick, you were so… biiiiiiiig.”

You can take the fat off a white guy, but there will aways be a little fat left in the white guy.

Visit more of Pat at: