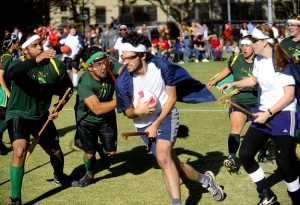 Muggles from across the United States and Canada gathered Saturday and Sunday for the fourth annual Quidditch World Cup, competing for victory at the highest-level competition of the no-longer-fictional sport. In its first World Cup showing, Yale finished in the top 16 out of 46 teams participating, while Middlebury beat Tufts in the finals, winning the championship for the fourth year in a row. [Yale Daily News]

My Dunkin Donuts manager will vouch for me: I’m really good with broomsticks.

Really though?  Really.  Looks a lot like the perfect game for a Dunkin Donuts employee of the month or the last kid picked for kickball…[insert Marco-Polo-and-blind-kids joke here]. Yale and Harvard would have Quidditch teams. *vom*

Do you think that JK Rowling is laughing it up at the thought of these collegiate intellects running around with brooms in their crotches?

Seriously, 46 universities train up teams for this.  She’s probably checking on the Quidditch World Cup 2010 write-ups in the Daily Prophet at this very moment…by that I mean: sitting up some royal chateau, wiping her rear end with the madd monies of her Harry Potter fortune and sneezing gold coins out her nose.

Would you rather have a broomstick rocking your goods or at least a helmet between you and that linebacker?  Suckers.

Laugh it up Chuckles, cuz for 49-ers v. Broncos game in London this year, The first sale of tickets happened in May and all 45,000 sold out in 90 minutes, with the second phase of 15,000 selling out in just 30 minutes during June.

Ugh…right?  But here’s a video to cheer you up.  Kid takes soccer ball to the face.  And falls to the ground like he got hit with a frying pan. Hard.  I want some broomstick-to-face bloopers next.  Find me some.  Please.