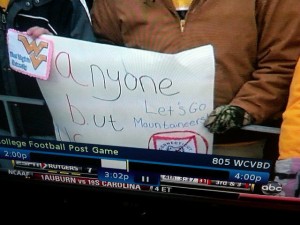 I’ve had a lot of proud moments as a Husky:  UConn’s first bowl appearance and win, defeating South Florida and fan’s charging the field, winning a share of the Big East in 2007.  But when Dave Teggart nails a 52 yarder, I think all those on the field moments were replaced by one felt as a fan.  Supreme vindication, is how I would describe it.  UConn reaching the pinnacle of college football, while simultaneously silencing the critics, the nay-sayers, the doubters of the team-that-could in Storrs, CT.  My hat is off to you.

Besides the simultaneous dropping of 80,000 jaws in West Virginia, the other best part of this victory is that they won this game (and played the entire season) the UConn football way: tremendous grit, never-say-die attitude, and with bone crushingly stingy defense.

There is more coming with the discussion of the BCS, primarily how the Huskies will fare against Oklahoma, but before we get into that we need to pause and think about just what Randy Edsall has accomplished:  He recruits his way, he runs an entire program his way, he’s taken a team from 1AA (Oh, the glory days of the Yankee Conference) to a BCS Bowl game.   He practices in a 54 million dollar facility that sits in the shadow of Memorial Stadium.  A physical juxtaposition that offers the most poignant of metaphors:  a new era has taken hold, while the previous one is a not so distant memory.

It is a proud day indeed.  I’ll see you in Arizona, kids.