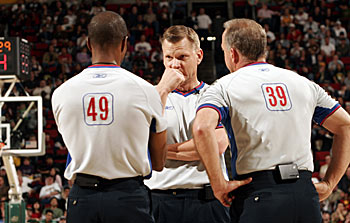 There have been Bad Boys and Bad News Bears, a Bad Santa, and this summer a Bad Teacher.

But there is another summer movie from Universal Pictures that is testing a new form of advertising.

Instead of billboards or commercials they are attempting to place the title into our heads subliminally. Since most of us don’t watch commercials anymore, this is being done while in the middle of live broadcasts. The idea is, by getting us to say and think the name as many times as possible, we will be predisposed to see the movie when it comes out in a few weeks.

I would never want you kind folks out there to be taken for suckers, so I am blowing the roof off these secret tactics.

Universal Pictures, in partnership with the NBA, presents: Bad Officials

It has been a subtle theme throughout the playoffs but in the finals, with the release date a few weeks away, they are really stepping up their efforts.

The goal all along has been to get you to shake your head and mutter, either aloud or to yourself, about how bad the officiating is. The more times you say it, the more your brain is embedding it into your subconscious. Then when the movie comes out, you won’t know why, but you will have to see it. 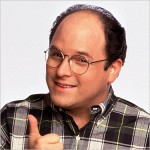 George Costanza tried a similar tactic on his dates in the early 90’s.

Of course you do.

Think about how many times you said bad officiating, or what a bad call last night.

There was the buzzer beater by Mario Chalmers at the end of the 1st quarter that shouldn’t have counted. They have replay for just this kind of end of quarter, momentum killing play, and a break in between quarters to utilize it. So why didn’t they?

There were no less than six phantom calls on rebounds that went against both teams.  Where players flew through the air with little to no contact and drew a whistle.

There was the travel by Lebron James that wasn’t called, then an imaginary double dribble that was. On the same play mind you.

There was the Jason Kidd travel on his shot fake that sent Dwayne Wade into the front row, nearly killing the oldest man in Dallas. They replayed to check if it was a two or a three, and it was neither. It was a travel.

Time and time again I found myself complaining about how bad the officiating was.

I will not allow the NBA to brainwash me into seeing a bad movie.

Instead, when there are bad calls, I will sympathize with the officials. I will understand how hard their job is, and I will say, “It’s ok guys. Everyone makes mistakes.”

We can stop these purveyors of rubbish from polluting our minds. It won’t be easy but we owe it to quality, and completely unique, movies like Pirates of The Caribbean 4, Cars 2, Planet of the Apes 14, Fast Five, Hangover 2, Transformers 3, and X Men: First Class, to at least try.

Who’s coming with me?