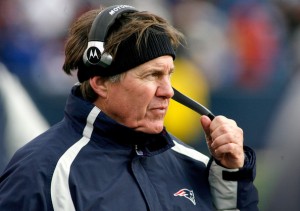 “One man’s trash is another man’s treasure.” – Bill Belicheck

Ok, so Bill Belicheck wasn’t the one who coined the phrase, but after his latest fleecing, one has to wonder if anyone has a better grasp on the idiom than The Hoodie.

Albert Haynesworth was trash to the Washington Redskins.  He was an expensive, three hundred plus pound pile of garbage, that they couldn’t afford, and he was starting to stink up the entire house.  The problem was that there was so much festering in the trash, that they couldn’t find someone who didn’t mind getting their hands dirty to take it out for them.

You know where a talented three hundred plus pile of trash is a treasure?  On a veteran team that has no tolerance for shenanigans, and a history for finding value in troubled players (Corey Dillon, Randy Moss).  The idea of lining Haynesworth up next to Vince Wilfork must have Belicheck salivating.  The guy is a cold blooded defensive genius, and will have no problem throwing Haynesworth back in the trash heap if he acts up.

Fuck you Jude Law, Belicheck is a real Repo Man.