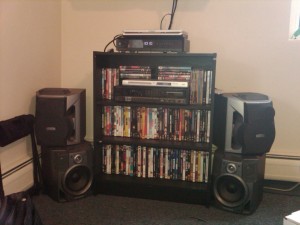 My apartment is my castle. A kingdom, which I liked, but had no part in decorating. My job was simple: help move everything in (a bed, dressers, couches, desks) and sit back an watch while my girlfriend and seemingly endless parade of cousins got to decorate. Fantastic, I say. I had one duty and one duty alone. I was given the take of setting up the TV/entertainment center. Which, (insert manly grunt here) is something I’m genetically programmed to do. Aside from the HD Cables, Wall Mounting Kits, and my power tools, my point of pride on this whole thing is my DVD collection. Its legendary, the pound for pound champ. Wanna slum it for the night? I have you covered: Dumb and Dumber, maybe you want some guilty pleasures: Sure, I’ve got Dirty Dancing and How To Lose a Guy. Highbrow? Why not?—pop in Midnight Express or The Godfather. Well last night I let my girlfriend and her cousin pick the movie, out of 100 something movies what did they grab? 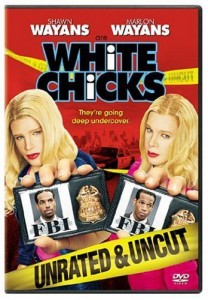 That’s right, freaking White Chicks. Now, I’m not saying this is a “dealbreaker” for me, time to cut my losses and head for the buffet—but, c’mon..White Chicks? Really? I might have to put the whole “engagement thing” on hold, until I trust her taste in cinema again. You know, she coulda picked “Sex and the City” and I would have thought “Well, geeze that’s not TOO bad” …but White Chicks? For shame….