Made my debut on GQ.com, who knew all those years holding out for them to start a plus-sized model campaign were for nothing.  All I had to do was become a writer.  Here’s the link, and a preview: 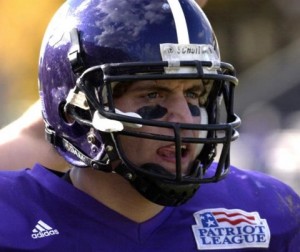 As college football approaches the start of its “postseason,” I am forced to reflect on the ’08-’09 bowl season—which was my last as a player. It was also, coincidentally, so mind-numbingly boring that I finally jumped on the we-need-a-playoff bandwagon. Maybe last year’s bowls weren’t boring for you, but that’s probably because you didn’t tune into the Pitt vs. Oregon State game, where Pitt lost 3-0. It was then that I knew the bowl season had reached its pinnacle. That shoot out (sarcasm noted) was a start-to-finish adrenaline rush, beginning with Oregon State’s penalty for (get this) wearing the wrong uniforms. Apparently the referees felt that Orange was soooo last season. But, I digress. If there was ever a greater argument for more excitement (read: a playoff system) come championship season, that was it.

With the Division 1-AA Championship game being played tonight (Division 1-AA, of course, has a playoff system), I figured I’d go right to an expert on the issue—someone who has actually participated in a college football playoff system.