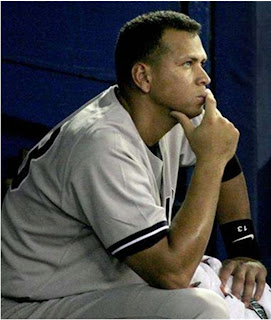 I really don’t. I still hate the Yankees, but not because A-Rod juiced during his formative years in Major League Baseball.

First, I don’t know why this is such a huge surprise to everyone. Were you thrown off by his chiseled jaw and Latino swagger? Well apparently that jaw was cut from HGH and not his south of the border genetics. Was he the poster child for all that was good and pure with the sport? I certainly hope not. He’s a New York Yankee for Chrissake. It should no longer surprise the American public that athletes are juicing, especially the ones we think are “clean.” In the land where bigger is better, and it’s only 40 more cents to “super size it”, all of a sudden we want our sports to be free of this self-imposed glutenous madness. I say Juice-on A–Rod! In fact, pass some to your boy (and hetero-life-mate) Jeter. A professional athlete’s career is only so long, so call it “maximizing your earning potential.” For example, the average career of an NFL linemen is only 2.5 years. 3 years gets you a pension, and league minimum is under $400,000. If shooting some synthetic testosterone helps these guys make a few extra bucks, or prolongs a career instead of leaving them broke and pensionless, then I am all for it.
I’m not saying the next step is passing out syringes to our Little Leaguers, but we are talking about professionals here. Let them make as much money as possible, by being the very best, in their decidedly short careers. I wouldn’t deny a doctor a new tool or medicine that would help him to perform his duty the best. So why are we denying these so called “performance enhancing drugs?” Educate them on the risks, then turn them free on an endless stream of Winstrol, cream and clear, HGH and whatever else strikes their fancy. And if other athletes decide that using these compounds is not for them, then so be it, this is America and personal choice or preference is king. But for some, the choice is simple, “let me be the very best I can be while I can still do this…” Cause when its over, it’s REALLY over.
I’m sure this will raise questions about my own (potential) performance enhancing drug use. I will surely lay it out there. When in college I used creatine and a million (awful tasting) protein shakes. Were there guys I knew that juiced? Absolutely. Many of them weren’t with the program long and the problem was far greater at other schools that I knew of.