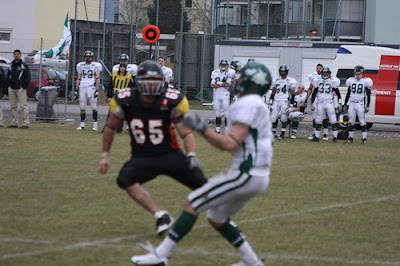 I told myself after the scrimmage that there was no need for pregame jitters. I had gotten my first licks in, and my talent level was vastly superior to that of the locals. But sure enough, come game day, this past Saturday, I woke up with my stomach in knots, the same knots I had throughout my season in the Big East. It was a combination of nervous anticipation, excitement, and above all else, a renewed love for the game.

Before the first snap, the referree informed me I’d be sporting one more helmet sticker, a giant white “A” on the back. They told me it was so they could tell who the “Class-A” players were (also known as “imports”) but I know it was really for AMERICAN.

Coin toss. We defer. Tremendous—we’ll get to set the tone on defense. Opening kick off—opposing team takes it to the house for 6. Defense will have to wait.

Their D-line was atrocious, at one point an exchange between myself and a D-linemen amounted to my suggestion that, “for five Euros, I’ll show you how to pass rush after the game.” Their linebacking core, on the other hand, was extremely strong and athletic—definitely the strong suit of their defense. It was a back an forth battle for most of the first half, they’d score, we’d score. They’d score, we’d score. And so on, until it was 28-21 at the break. The final score would be 50 to 31 with my team coming up on the short end. However, despite the loss I still had fun. It was good to “be a football player again.” 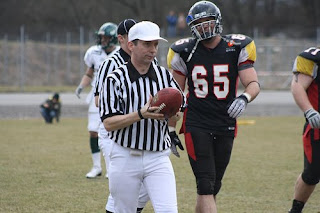 ….the rest of the story HERE