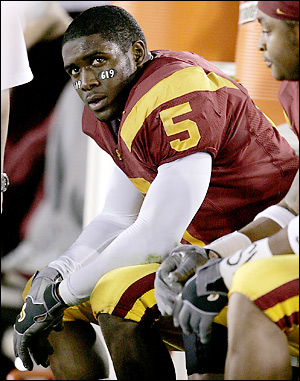 Like some bad deleted chapter from “1984” the University of Southern California continues their attempts to erase the Reggie Bush era from our memories.  This weekend the Trojans removed Bush’s jersey from his tenured position juxtaposed to fellow Heisman winner Matt Leinhart in the Colosseum (just in time for Saturday’s home opener against Virginia).  This comes after the USC’s copy of Bush’s Heisman Trophy were removed from Heritage Hall on campus.

I have to pause and ask myself, “Isn’t all this just a little bit ridiculous?”  I know that the school is trying to do all the can to comply and cozy up to the NCAA, but shouldn’t they be standing up for a player who brought so much notoriety and attention to the University?  NCAA “violations” are one thing, but denying that he ever existed is a slap in the face to what he did for USC while still a student-athlete.

When will a school finally decide to cut their own path and honor players for the amazing accomplishments they …uh…accomplish while enrolled.  The NCAA can have their sanctions, their disillusions of “amateurism”, but why can’t USC (or any other university) stand up and tell them where to stick it?  Keep Reggie Bush in the record books, in Heritage Hall, his Heisman on display.  All the real players and people that matter know what it is like to be a part of a major college football program, his accomplishments are just that: his.  No amount of scrubbing the history books can erase that truth.