Like it or not, this blog is actually popular (I know!–who-woulda-thought?). Something was just brought to my attention, that needs to be discussed, addressed, squashed, what-have-you.

I took down the “SCOREBOARD” that some of you early readers might remember, because in my opinion it was a little too “hey! look at me.” But for the record, Thoughts From a Fat White Guy just passed 300,000 hits. Pause for celebration.

So where exactly am I going with all this? I’m trying to say Thoughts From a Fat White Guy has gone global. Until now it has been very well received….

Well recently FWG was “called out” in a blog post and news paper article by German reporter Jürgen Kalwa, who posted his rant on Football-Austria.com (screenshot below) 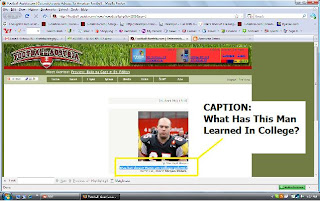 The article starts off stating that “Rob Lunn has learned nothing in college” and “Even a fool can have an opinion” was that he was upset about my “interpretation” of culture–whether it be at “the spa” (FWG not used to that much nakedness), caricatures of President Obama proudly displayed on the streets of Klagenfurt (see below), as well as the style, dress, and practice habits of bar patrons and teammates alike (my sweatpants, their Canadian-Tuxedos–both in poor taste). 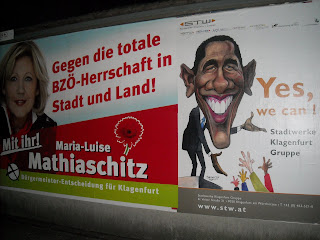 I have ALWAYS hoped that my writing is worth a laugh and maybe a few insights into life as a college athlete or football player. Self- deprecation has always been the name of the game. I am not patronizing my teammates or Austrians, rather I have thought it humorous my observations on how life is different compared to the United States. I have not once said that one way of life is better than the other, because if anything, being here has shown me one is NOT superior to another. Simply put, the world is smaller; we are no longer isolated nations and no man is an island. The 21st century is truly marked by the concept of the global community, barriers (political, social, and economic) are being broken down everyday.

For one person to say that my American teammates and I are ignorant, or “have learned nothing in college” is exactly the type of broad and sweeping generalization I would hope to avoid, especially from someone who is making the argument that I am the ignorant one.

After four years of college, graduating above a 3.0 with a degree in political science, being told that I do not, “understand the intricacies of a political culture” is something to which I take great offense.

I have not made political statements with my blog regarding how Austrians (or Europeans) view America, or I them. I am here with the most open of minds, truly soaking in all this country has to offer. Above all else, I am here to play football and enjoy a new (and sometimes strange) experience. The concept of “hilarity ensues” should be explained to Mr. Jürgen Kalwa — my experiences in these situations don’t make the experiences (people, places, things) bad, they make the interaction funny. FWG goes to Nude-Bath: Hilarity Ensues.

In closing, I hope that everyone continues to enjoy my Tales From Austria, whether it is on this site, NESN.com or Deadspin.