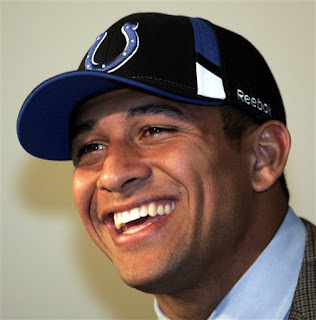 Do you know how weird it is to go to bed on one day, wake up the next and your friends call you telling you they are millionaires. Alright, well that wasn’t the ENTIRE conversation–but it did come up once or twice. The 2009 NFL Draft marks the most significant moment in the UConn football program since the change from IAA to Division I Big East play.
Since Alfred Fincher and Dan Orlovsky in 2004 we (UConn) have been searching for an identity. Are we the little program that could or do we belong in the debate with USC, Michigan (pre Dick-Rod), Notre Dame, or Oklahoma. The slow trickle of NFL talent out of Storrs and into the league in the last 5 years has made the answer (to those outside of Connecticut) a resounding “No.”
In a blog during this past season (Your Questions, Answered!), I wrote “Fight Club” style about what it meant to play for UConn:
UConn Football does not care what others think of UConn Football. UConn Football will keep doing UConn Football until due credit is received. Even then UConn Football is not satisfied. UConn Football does not sleep, UConn Football waits until next Saturday, when UConn football can again prove the haters wrong. Only UConn Football knows how important and talented UConn Football is. Only those inside UConn Football Know how hard UConn Football works. Only UConn Football’s opinions matter to UConn Football. (I am Jack’s Smirking revenge)
What it meant to “silence” the haters and stay focused on our task in the face of little to no media respect (thanks Lou and Mark!) as well as the slew of other insults we endured.

Downtown Donny Brown:
The new face of UConn football in the NFL. I tried to get a hold of Don for this blog (I mean, what coud be more important than this?)–but hes a busy guy. I did get a chance to talk to his Dad a while back and he said that the neighborhood kids were coming to their house asking for old shoes and shirts and having a few, “is Donny home, can Donny come out and play?” moments. Let me tell you one thing. After for years with Don, what you see is what you get. Believe the hype, he is as humble as he is talented. The Colts have picked an outstanding young man.

Cody Brown:
Despite my predictions to Cody that he was going to end up at Buffalo and no one was going to want to go to his games but me, he ended up with the Cardinals. The Arizona Cardinals have picked one of the best athletes in the nation, who possess not only the physical gifts but the kind of personality that goes about his work quietly and efficiently. Cody didn’t really talk to anyone for his first 2 years at UConn, focused on doing his job and that was it. His high school teacher, Ms. Halliday confirms that Cody was always “a quiet storm.” CB called me when I was in Spain (I told him he’d have to pay for the $3.00 a minute charges) and he was ecstatic about his new adventure.
Darius Butler:
I think New England has a new favorite son. Darius is an “athlete’s athlete.” 43 inch vertical? Why not. Big Bill over at Foxborough better know that he has one of the fastest and most ferocious players on his squad, not to mention a man of integrity and discipline.
William Beatty:
It is a well documented fact that I hate all offensive linemen, but its hard to not like Will. The kind of kid that will hold, scratch, claw, and generally annoy you during the whistles, but gently trots back to the huddle for the next play. A disarming niceness and “matter of fact” type humor that can only make you laugh. Like the time I walked in my house (a few miles off campus) to find Will sprawled out on my couch, watching “A Bug’s Life” –which he just ordered On Demand. “Uh, Will–what are you doing here?”
“Watching A Bug’s Life…wanna sit down.” That is Will in a nutshell.

The Fans.
I cannot say enough about the fans of Connecticut Football. My time as a player at UConn (how weird is it to say that) was made enjoyable by the small things the fans did. Warming up in our end zone as we yelled, “gotta be perfect today, gotta be great.” and the group of 10 or 15 who were there to cheer on the D-Line. Or the Husky Walk where Daniel Narvesen would be there, the last hand I’d shake before going into the locker room. Maybe even the people that stopped at our dinner table at Outback (a post game tradition) and congratulated us on doing a “great job” or even a “we’ll get ’em next week.”
This exposure and success with the players and program is a testament to you, so here is a heart felt “thank you” from me. You made my choice (and my teammate’s choice) in UConn a wise one.