WASHINGTON — A man threw a book towards US President Barack Obama after a campaign rally in Philadelphia, and was detained by Secret Service Agents, an official said Monday.

The man was later released without charge, after an investigation found that he had meant no threat to the president, Secret Service spokesman Edwin Donovan said.

Television pictures showed the paperback book sailing through the air close to Obama after the rally on Sunday, one of a series of events leading up to mid-term elections, though the president did not appear to notice it.

The man, who was not named, was described by Donovan as an “over exuberant” supporter who wanted the president to read a copy of a book he had written. [AFP]

What??  I want Obama to read my posts.  Get ready for my laptop homeboy.

This is just proof that our government’s gone soft.  Apparently a streaker attended the rally too.  This is an outrage.  Nobody even got arrested.  They chase after MLB field crashers more emphatically.  What did I really expect from our fearless leader (you know, the one who took his family to Panama City Beach, FL for vacation…I went to PCB for spring break – Spring Break ’09 holler – and I don’t even want my kid’s kids to know about that week of my life.  But don’t worry our president takes his whole family along for the ride.)

The YouTube video is an even bigger disappointment.  I didn’t even see a book.  In fact, I think I watched it 8 consecutive times only to see a faint glimpse of a square shadow at the 00:21 second mark.

The commies are dishing out lies.  LIES I SAY! 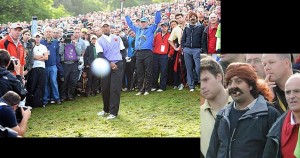 Cigar Guy, we applaud you, for having the balls that the bookthrower/streaker did not have.  It’s all just my Happy Gilmore fairy tale come true.