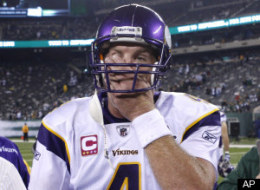 Another star-studded pro gets caught with his pants on the ground – this is exactly why FWG keeps me around (well, that…and for the free vajazzle.  more on that later fellas).

Like, I don’t wanna toot my own horn but sex scandals are my bread and butter.  And at times like these when I should be putting all of you howling neanderthals in line for acting like a bunch of pigs, I’m just hoping that somebody can to clue me in to Elin Nordegren leaving weak-sauce-Woods back in January only to crash at the Favre ranch (WISN).  Hello…what’s the x-factor here?  It just keeps getting better!  You can’t make that up.

Favre plays his biggest hand *cough* and they call his bluff.  But seriously, is that the dead fish flapping around in #4’s jock?  Bro, ‘she is not answering my calls’ doesn’t translate to sending her snap shots of your dong.  Especially like that.  Those just scream, “I CAN ONLY HOLD THIS POSITION FOR TEN SECONDS BEFORE IT FALLS*.”  Obviously that chick was going to blow up his spot.

Seriously.  Deny, deny, deny.  Deny the allegations and deny that thing is yours.  You got caught with your pants on the ground.  You got served.

[Thanks J-fizz for the tip*]