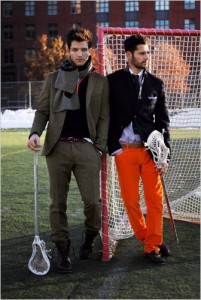 The designer Michael Bastian, who has breathed new life in the Gant clothing company, has done so in part by channeling lacrosse in its newest line — going so far as to feature half-naked lacrosse players showering in the windows of its Fifth Avenue flagship last month. [NY Times]

Like, what up Friday morning and Hipster-slash-Lacrosse imposters?  Let’s get this show on the road.  Dunkin in hand, and a day full of office responsibilities I’m trying to avoid.

Correct me if I’m wrong, actually don’t.  I’m sure that Victoria’s Secret ‘feature half-naked models in the window’ campaign doesn’t translate so well for tweed sweaters and tight pants.  WTF put a lacrosse stick in their hands and, voila!  Instant image turnaround.

Revival of that rich-boy Duke Lacrosse look – oh wait, that powerpoint slut has taken care of things.  Remember how lax bros were like, my new thing?  …right… Ain’t no Mister Hipster be barkin’ up this tree.

But there’s this fine specimen reppin the lax community, Paul Rabil, who cranks it at 111 mph.  That is impressive.   Kinda caught my eye.  They’re calling him the “LeBron of lacrosse”, straight up stunner.  He kinda reminds me of Russell Brand.  Ride that wave.

Circa 0:28 second spot is when The Bieb spits the line: “Call up Mr. Brady, tell him leave his hair to the guy who sings ‘Baby’.”

Hahahaha that just sucks!  So fresh, so fly, that The Bieb himself has to go and cut you down.  And then we hear about Elway getting dominated by some Ponzi scheme thing (AOL)??  Shooooot!  Lemme go grab my box of Buffalo Bills Tissues – true story, see here – and find some romantic-slash-halloween-horror flicks to pirate online.  Stay tuned.