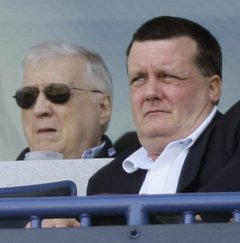 You recently came out and said that the 2010 Yankees underachieved because they were still celebrating their World Series title from 2009. The players were “too busy building mansions”, and it affected their focus on the field. Though you maintained, “I am not singling out any individual”, it seemed an obvious shot at Yankee captain, and recent mansion constructor, Derek Jeter.

Now Hank, ordinarily I would be inclined to admonish you for taking such a public shot at the face of your organization. Such attacks always seem petty and after you guys played chicken over his contract this summer, it seems that you have a personal problem with Jeter. I am not saying that is the case but such middle school lunchroom finger pointing is going to give that impression. Ordinarily I would prefer you kept family business in the family and if the whole family struggles, then you lambaste them all. Not just the eldest brother who has accomplished the most and led the family into a shiny new house.

The more I thought about what you said, the more I am coming around.

In 2003 your father George spoke out publicly after he felt that Jeter had stayed out too late at a birthday party. With Jeter’s burgeoning popularity and your father’s health well below the Mendoza line, The Boss was forced to back off from the public warfare he seemed determined to wage. Personally I can see where the Steinbrenner’s vendetta comes from. Jeter has won 5 rings for the Yankees so he probably walks around the Bronx with some form of narcissist complex doesn’t he? That is why you guys built that cavernous new stadium isn’t it? All that empty space was needed so you could coexist with Jeter’s ego.

He bangs super models, has more money than he knows what to do with, wait sorry he builds mansions, I forgot, and he is slipping on the field. Your family’s business is to knock him down a few pegs.

You should know Hank, I am a Red Sox fan. But despite my hatred for anything in pinstripes, I had always found a way, as a baseball fan, to respect Derek Jeter. I watched him shine on the biggest stage as a rookie. I watched him play hard, so hard that it seemed he had no regard for that super model magnet of a face, and I watched him side step potential drama with teammates with the same dexterity he showed on the field. Derek Jeter, to me, played the game the way that it should be played and in this day and age I found that respectable. Never going to like Jeter, although I did happen to meet him one night and he was polite, engaging, and it kills me to say, pretty damn cool.

It is that old school cool that he plays like the pied piper, getting all of us, even a diehard Sox fan, to respect him. Maybe the rest of us have been fooled but like your father before you, you see right through it don’t you Hank?

Since you couldn’t be any less cool, I have to see the validity in your argument here. There is nothing but the truth to sway me, since I don’t like or respect you. That is why I have come around. Jeter is a menace, a mansion building menace, and he must be dealt with.

Like any good son would, you are dealing with this menace as your father would have liked. You are attacking him publically. Jeter, for his part, is calmly sidestepping those attacks while responding, as always with class. It must enrage you to see your father’s tactics land harmlessly on Jeter’s shoulders like an unbroken water balloon. But have faith Hank, if history has taught us anything it’s that waging a war takes time. Especially a public war that against an opponent your father already tried to bring down once.

So stay the course Hank, keep fighting your father’s war in the way he would have fought it himself. And if you ever doubt that you are doing the right thing, invite George W. Bush out to dinner the next time he is in New York and pick his brain. No one is more qualified to advise you on doggedly pursuing a war that everyone is against yet must be fought because that’s what your daddy would have wanted.

When you feel down you will have W’s words, and the shining example of the immense success of his war with Iraq to lead you onward.