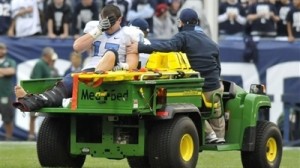 The NCAA has always had a stranglehold on fun.

I’ll save the “Amateurism is a joke” post for another day; what I’m talking about is the celebration factor. NCAA — No Celebrating At Anytime.

In my time at UConn, unfortunately I did not have the opportunity to do many touchdown dances. After the one touchdown I did have (ah, I recall it fondly), I was too surprised by my

own good luck to even consider anything flashy. Who really wants to see a fat white guy dance anyway? But, I digress.

Until this weekend, I thought it was foolish. If someone earns a touchdown,

let ’em dance, spike, and sache themselves into the SportsCenter Top 10, or at least YouTube lore.

But then, after watching the UConn-UNC game this weekend, I thought to myself, “Hmmm, maybe the NCAA is right,” after a UNC player went down in his post-touchdown jubilation. It wasn’t until I got online and read this, that I was inspired to write this post:

“UNC’s Zack Pianalto dislocated his fibula after catching the tying touchdown. He caught his cleats wrong on the turf as he celebrated.”

Celebrations do seem to be incredibly detrimental to a football playe’rs health,

so I decided to do a little research on football players that have been injured celebrating.

Probably the go-to example of how not to celebrate your accomplishments, the kicker tore his ACL after a meaningless field goal. Kicking a field goal: good. Six months of rehab: bad.

In the 2007 BCS title game, Ginn returns the opening kickoff 93 yards for a touchdown. He would miss the rest of the game after he injured himself celebrating in the end zone with his teammates.

Ohio State went on to lose the game, and Jim Tressel sobbed himself to sleep clutching his sweater vest.