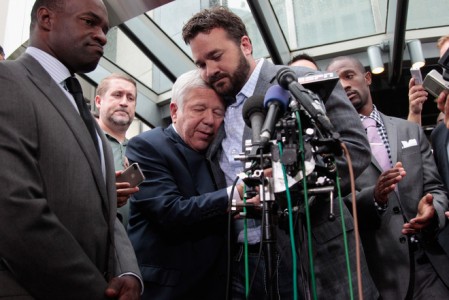 I knew that what I was watching was born in some PR incubator. There was something sneaky and disingenuous about the set up; Jeff Saturday thanking one of the owners, then wrapping one of his giant arms around him to squeeze any remaining life out of the lockout. The ‘spontaneous’ display of public affection seemed all too familiar in a world where everyone who sleeps with hookers, kills dogs, does drugs, crashes his or her car, or is accused of sexual misconduct, appears in front of a bunch of cameras in some sappy image salvaging situation.

But despite the skepticism that runs rampant through my brain, I found myself believing it. What’s worse is that it managed to weave its way through the hardened layers of doubt and actually find a heart string or two.

The reason that this particular Hallmark moment, which was intended to erase any lingering animosity NFL fans had toward the owners and players, hit home?

It was, dare I say, genuine.

I realize that is practically a four letter word at this point, but watching a beaten down Robert Kraft, who had recently lost his wife Myra, collapse into Saturday’s chest didn’t trip my bull shit alarm. Instead I found myself forgetting about the lockout, and being reminded that even something as unredeemable as grown men bickering over bajillions of dollars, can demonstrate the good in people.

The embrace was awkward and clumsy, a sure sign that it wasn’t forced or staged. Had it been either it would have been easy to fake. But for men like these, a genuine display of emotion doesn’t come naturally.

Maybe my first reaction was right, and these emotions are exactly what the two sides had in mind.

But like a young kid with Santa Claus, the Easter Bunny, and the hope that they won’t turn into their parents, until someone proves otherwise, I will believe.