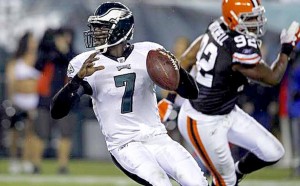 I want to hate on Michael Vick for making $100 million, less than two years after being in a federal prison for torturing and killing dogs. I want to hate him. I really, really do.

But you know what?

The guy screwed up, and he did so in a way that most of us find inhumane and despicable, but he paid for it. Upon his release I thought he would be a serviceable backup, destined to play out his career in the shadows of guys like Brady, Manning, and Brees. An insurance policy. A cautionary tale.

I doubted Vick’s ability so much that I traded him away last year in fantasy. Ok, it was for Tom Brady and if I had it to do over again, even knowing that it cost me a chance at the title, I would probably talk myself into it again. Yup I’m a bit of a homer, sue me.

But after last year, I won’t doubt Michael Vick’s talent again anytime soon. I also will admit that he has earned back my respect. Something that, as a dog lover, I thought would be impossible.

If we all were burned at the stake for one misstep, one lapse in judgment, how many of us would have survived high school? Or college?

Michael Vick was supposed to be a role model and as such, he was held to a higher standard. However, a true role model should be looked up to for how they handle adversity just as much as for how they excel on the field. While his adversity was self made, he overcame it, paid his debt to society, and returned to the game that most of us thought had left him behind, stronger than ever.

Phuck you Philly. Phuck you for having a guy who is hard to hate, despite the fact that he killed dogs and is going to make a $100 million.