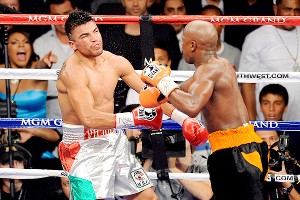 Floyd Mayweather is not a likable guy.

It is a fact that HBO has used to propel 24-7 to one of the most entertaining sports programs on TV today, and to make sure we are all interested in his next fight. Take underdog A, paint him as a hard working guy who is loyal to those around him, and who is genuinely hungry for a shot, and match him up with Mayweather, who except for working his ass off, shares nothing in common with the likable challenger.

It worked with De La Hoya, Hatton, Marquez, and Mosely.

24-7 is great TV, but it is also a genius marketing tool that helps them sell a fight that has one deep, dark secret that they don’t want you to know. It is a complete mismatch.

In the case of Mayweather vs Victor Ortiz, it was even more of a mismatch because Money Mayweather is the smartest, craftiest fighter on the planet, and Ortiz is a dummy.

Ortiz would have to be a dummy to stand there in front of a trained assassin with his hands down, right?

Now, I understand it was a terrible way to end a fight, but let’s be clear. The blame for that goes directly onto Ortiz’s shoulders, not Mayweather’s. Ok, so maybe a little should fall on Joe Cortez for not even paying attention to the fighters after he called time in, but he didn’t have gloves on. Ortiz did.

If an NFL QB gets hurt on the first play of the game, does the other team say, ‘Shit guys, he’s hurt, maybe we shouldn’t blitz any more’?

In a basketball game, if the guy who’s guarding you turns an ankle, do you stop trying to score?

Boxing is a violent sport where both men are trying to literally punch the other unconscious. Protecting yourself should be the top priority. Victor Ortiz’s top priorities were head butting a guy who was beating his ass, kissing him in order to apologize, then wandering around the fight like a deer in headlights waiting for a car to come along.

Mayweather’s left hook was like a Mack truck driving towards him with the lights on, and the horn blaring. It wasn’t dirty. It wasn’t a cheap shot. It was smart. The straight right that followed was merely a Honda Civic that rolled over the carnage after the fact. Ortiz was already out on his feet.

Victor Ortiz is a talented fighter, but showed on Saturday that he is too dumb to be a great boxer.

The Baltimore Ravens were dumb enough to think that they could beat the Tennessee Titans with the box score from their Week 1 victory against Pittsburgh.

Michael Vick probably feels like a dummy, or at least will once he’s a bit less concussed, for taunting the Atlanta fans on Sunday night.  Pointing at the scoreboard when the game isn’t over yet, is pretty dumb, even for a guy who murdered puppies. 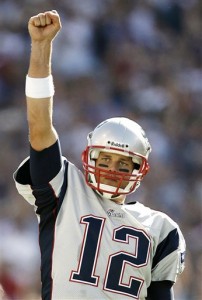 I’ve been hearing it for years.

Tom Brady is only good because of the system, and if he played on another team he wouldn’t be a top 5 QB.

For all the dummies out there who will consistently bash Brady, I submit the following;

Right now, with Manning on the shelf, here is my top 5, in terms of who is the best QB. Rodgers. Brees. Brady. Rivers. Tie Vick/Roethlisburger.

Rodgers is the best natural athlete, other than Vick, and the most complete QB in terms of the skills needed to play the position. Brees is the most accurate passer in the league, and second only to Manning in terms of football IQ. But if I had one game to win, and could pick any QB to win it, I’m picking Brady.

Every QB plays in a system. Sure the Colts wouldn’t even be a playoff team without Manning.  But he created his offense, so would he put up the same numbers in a brand new system with the Cleveland Browns WRs to throw to?

Rodgers has the best arsenal of weapons in the league, and Brees has built his team’s offense with head coach Sean Payton. It took Brees leaving San Diego, and joining up with Payton, for him to be considered an elite QB, so why isn’t he considered a ‘system’ QB?

And for all of you out there waiting to make the point that the Patriots won eleven games without Brady, and that any QB could thrive in that system, Matt Cassell lead his team to the playoffs last year. The guy is no slouch.

I also don’t recall Belichick having a ton of success as an ‘offensive genius’ before Brady.

You ask Quentin Tarantino about movies like Pulp Fiction, and the Kill Bill series, and he will openly say that they couldn’t have been as good without Uma Thurman in them. Saying that Thurman is a one dimensional actress who can only be good in Tarantino movies downplays the synergy that they have together. The chemistry brings out the best in both of them. Thurman played those roles better than anyone else could.

So why should Brady be punished for the fact that he is better at his job, which is executing a system, than anyone else?

The fact of the matter is that he doesn’t play on another team, and we can’t hypothetical put him and Manning on different teams to see what would happen.

I’ve seen Manning and Brees lose games for their teams. Manning against the Patriots last season threw a horrible interception with the game on the line, and has blown it so many times that there is a ‘Peyton Manning face’, that is assigned to losers who choke on the biggest stage.

Brees, with his team unable to run the ball, threw over twenty interceptions last year. One could make the argument that when everything was focused on him, he played his worst.

Regardless of systems, I have seen Brady lead his team to more wins than any other QB in the league today. Anyone who quibbles about his ability, and his deserved place at the top of the QB mountain, is a dummy.

I don’t want my team to have the most exciting offense, the most efficient offense, or the most precise offense. I want my team to win. That’s why there is no one I would rather have leading my team, for one game, than Tom Brady, because above all else, he is a winner.