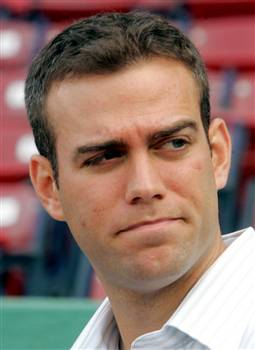 One of the things that was said to have brought about the ‘alleged’ end of the world in The Bible, was people worshipping false Gods.  If my catechism lessons serve me correctly, a golden calf to be precise.

Doing so now would certainly not be looked on any more favorably would it?

Probably not.  Yet Theo Epstein gets to sit up on a pedestal serving up golden milk, even showering it on his followers, while people lap it up blindly.  Epstein has been revered, and even worshiped by Red Sox fans for breaking the Curse, and bringing the city of Boston two World Series Championships.  But it seems now, as it is Francona, and not Epstein, who is rumored to be facing the guillotine for the Sox collapse, that people are honoring Epstein before the God of common sense.

Surely such blind devotion in the light of names like Lackey, Drew, Crawford, Lugo, and Jenks,  is going to draw the ire of whatever God gets to end the world next. (Side note: I imagine they decided this in an ancient form of ro-sham-bo.)

I say we stop following the Golden Boy, consider the possibility that he is a false prophet who got lucky a few times, not unlike the trailer trash who win the lottery, and attempt to save our eternal souls before its too late.