Tiki Barber comes out of retirement after 4 years, and plays in the NFL in 2011. 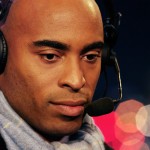 This is the only headgear we should see on Tiki Barber

One of those things is actually going to happen.

Despite being almost 36, and 4 years removed from the daily grind of playing running back in the NFL, Barber has filed the paper work to come out of retirement. 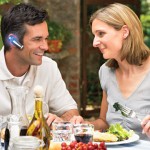 Doesn't she look like she wants to stick that fork in his ear?

Much like all the fools who walk around with Bluetooth headsets, when they could very easily use one of their hands to hold their phone (driving in a car is the only possible exception where I could over look the use of such a device), I now want to punch Tiki Barber right in his stupid face.

Barber stepped out on his wife the same way he stepped out on the Giants, choosing a cushy gig with NBC over football, and a taught 23 year old over his cushy wife.

The league bans players for using performance enhancing drugs, smoking weed, and playing with strippers, so why not ban them for being fair-weather assholes who use the league as their own personal fantasy camp?

This would have nipped the whole Brett Favre thing in the bud years ago. You retire, that’s it. No do overs. No backseys. We can’t force men like Barber to stay with their wives, or men like Favre to not send pictures of his junk to women who aren’t his wife, but maybe it is time, with the collective bargaining agreement negotiations, to put a stop to the waffling once and for all.

Here is my proposal. You retire, and decide you want to come back? Fine. But you have to endure every minute of hard work that the man, who’s position and playing time your ego is raping, endured while you were off being unfaithful…sorry..I mean being retired.

Nothing would discourage a man like Barber from attempting an ill advised comeback than actually forcing them to put in work. Barber knows he is a name, nothing more. And some team is going to throw him a contract, and a wheelbarrow full of money, that should have gone to the guy busting his ass everyday on the practice squad because all he wants to do is play the game that he loves.

I will be offering a steak dinner to the linebacker who re-retires his selfish, spotlight hogging ass.