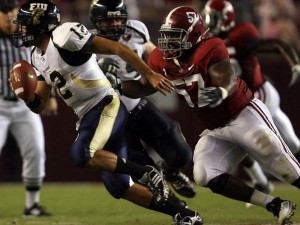 There have been reports on the NFL Lockout for the last 110 days, which doesn’t include the amount of posturing, hypothesizing, and bickering, that went on before that.

I have stayed away from daily reports about the lockout because, well, all I care about is watching football. There is an obnoxiously jaded quote about boat owners that reads; The two happiest days in a boat owners life are the day he buys the boat, and the day he sells it. While I disagree that someone with the financial means to own a boat is somehow less happy than I am because he has that boat, the sentiment echoes my feelings about the NFL Lockout.

All of the rest of it means nothing to me. It’s like the commercials between my favorite show. I know they are eventually going to end, I usually get up to go to the bathroom when they come one, and am really only concerned with when they end so I can get back to watching Mob Wives. Unfortunately there is no big DVR in the sky that allows us to fast forward through the lockout.

Despite trying to leave the room whenever this 110 day old commercial comes on, there is one story that I feel bears repeating.

Having done extensive research on the prospects for the 2011 NFL Draft for www.ultimatenfldraft.com, I found some players who I would be rooting for regardless of the teams that they played on. You can’t spend that kind of time analyzing someone without developing an emotional association. It’s why no one will ever love you as much as a stalker will.

One of the players that I was most impressed with was DT Marcel Dareus out of Alabama. The guy had the size and athletic ability to solidify any defensive front in the league, and he seemed to be a genuinely hard working guy who battled back from injury to be better than he was before. None of that makes me as proud to say I was a Marcel Dareus fan as the fact that he has been spending the lockout cutting grass for his godfather.

The man is worth millions of hypothetical dollars, and instead of bitching about the uncertain nature of his next paycheck, he is out there pushing a mower. The fact that he chose to work, and in doing so, helped out a family member speaks volumes about the kind of man that Buffalo drafted.

As a Patriots fan, there aren’t too many times that I can remember saying this with a straight face, but I’m a little jealous of the Buffalo Bills.