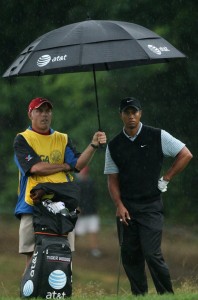 Could irony be defined as someone blowing up his life, his public image, and his golf game because he was habitually cheating on his wife, and then firing his barrel chested buffer and closest friend because the friend was cheating on him?

It was announced yesterday that Tiger Woods had fired long time caddy Steve Williams. The announcement was merely a formality as Woods had actually told Williams of the decision a few weeks ago, but the two decided to wait until after the British Open. Williams, out of work while his employer is on the mend, requested that he be allowed to carry Adam Scott’s bag during The Open Championship. Woods and his camp denied the request. The stout New Zealander did it anyway.

You think Tiger Woods asked Elin Nordgren’s permission before he went out and tried every possible combination dish at the local Applebees?

Probably not, but the denial was implied by the wedding ring on her finger.

Both men wanted to go their own way. Woods had to know that eventually his actions were going to cost him his marriage, but Williams didn’t expect that after all he had done to protect Tiger over the years that his infidelity would cost him his job.

He seemed genuinely hurt by the dismissal.

Tiger Woods has watched as everyone has jumped off his ship; his wife, his sponsors, golf fans, and now his health. Maybe he figured that he would beat Williams to the punch, and firing him was his Groucho Marx moment.

Ten years ago, Tiger would have been overwhelmed with men clawing their way over one another like it was Black Friday at Wal-Mart and he was a flat screen, for a chance to carry his bag. In those ten years that bag has become heavy, and no one, aside from a good friend, is likely to jump at the chance to loop that extra weight on their shoulders.

Instead of going through a very public search for a new caddy, which is going to result in him trying to lure someone away from another golfer, and more damage to his reputation, I have a solution for Tiger Woods. 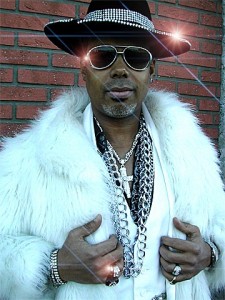 You need constant female attention, and getting married again is going to be a bit tricky given your, how to put this politely…history. A pimp would be able to satisfy that, and it would draw a huge portion of the media spot light just far enough off of Woods that he could start focusing on playing golf again. Can’t you just see the headlines now?

Tiger’s Pimp cuts Rory McIlroy in line for the buffet

Tiger’s Pimp helps him put the ball in the hole again.

Tiger longer than ever with help from his Pimp.

It would be the kind of polarizing media circus that he needs in order to step all the way over to the dark side. The dark side can give a man dangerous powers, but there are always consequences. For Tiger, what’s left to lose? Sell your soul, become a bad guy, and get back to chasing down the Golden Bear. Think about how much fun it was to root against (he who shall not be named on this page) and the Miami Heat?

Now imagine the joy it would give you to see Tiger Woods and his Pimp compete, then fall just short to Mickelson, McIlroy, or someone like Darren Clarke!

Everyone loves Will Smith, or at least lots of people love to pay money to see his movies. In I am Legend, Smith could have saved a bad movie by turning into Jack Nicholson from the shining. If he had embraced being a detestable lunatic, totally justified given his character’s plight, it would have completely turned the movie around. Instead he Fresh Princed his way through, like he always does, and never risked being perceived in a negative light.

Today, Woods’ career is turning into a crappy movie, and it’s time for him to embrace the dark side.

He has spent so much time pretending to be someone he is not. Now that there is no one left in his corner, he can finally say goodnight to the good guy, and say hello to the bad guy.