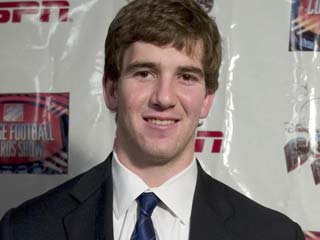 Who would you pick?

More importantly, would you say those two quarterbacks even belong in the same conversation?

Quarterback A is Eli Manning, who was recently…(How bout ambitious? Yea, that sounds better than dumb) ambitious enough to think he was in the same league as Quarterback B, Tom Brady.  Sure the numbers aren’t that out of whack, but consider that Brady’s true averages, if you eliminate 2000 and 2008 where he only attempted fourteen passes, would be over 4300 yards and 32 touchdowns a season.

Then, unfortunately for Manning, we would also have to consider the playoffs.

In seven  playoff games Eli has thrown seven interceptions, seven touchdowns, and 1297 yards.  That adds up to a line of 185 yards, 1 TD, 1 int.

The stats speak for themselves, but since they are stats, and can’t type, I will type for them.

How, after looking at these numbers, could Eli Manning even think he is in the same league as Tom Brady?

I’ll tell you why.

Clearly Eli has gotten his hands on some peyote, dust, PCP, or some other really cool thing I don’t even know about yet, and the boy is higher than a hippie in a helicopter.

I demand that we test him, immediately if not sooner!